Having left Surabaya, I have finally come to Jakarta, the capital city of Indonesia. Since the city represents Indonesia, the atmosphere is totally different from Jogja. Needless to say this is a real city, A CAPITAL CITY. I’ve heard there are some really cool spaces here and I am so excited. After having a breakfast, taking a taxi I head to Forum Lenteng. Though I arrived at the address I was told, there is no signboard and I am anxious whether the address is correct or not. 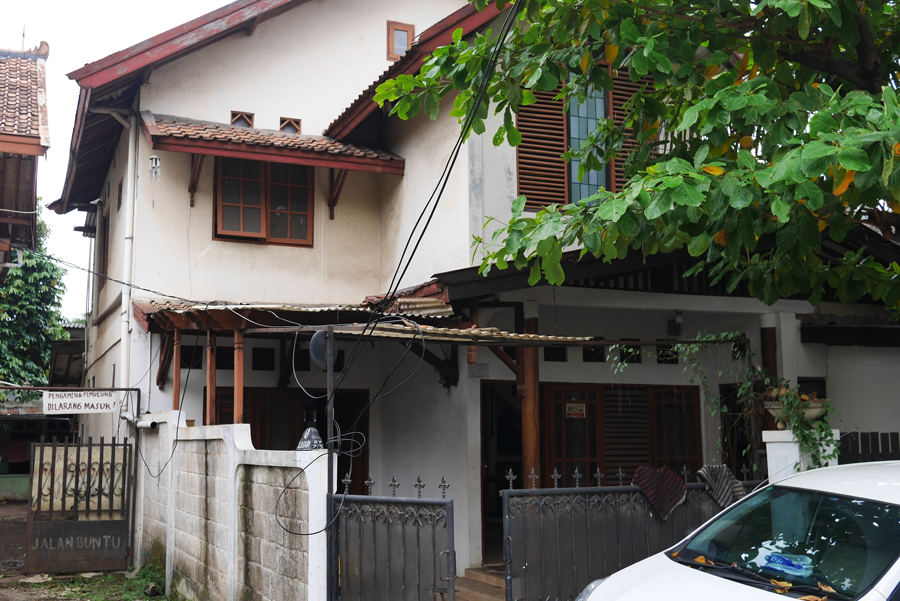 But then the wifi network shows “Forum Lenteng” and I am sure I am in the right place. But nobody seems to appear as it reaches the appointed time for our meeting and I knock on the door but there is no response. 15 minutes pass and I start to worry I have got the time wrong. I push door, oh, it’s open! Entering inside I call out “Hello … ” rather timidly, but there is no response. Going upstairs in the dark, I finally find someone!! He doesn’t seem to notice me since he is listening to music hard under his headphones and he looks really shocked when he finally sees me. I am so sorry. So I explain that I have an appointment, then he goes downstairs and banges on a locked door of the room. A person with sleepy eyes comes out of the room, he is Yuki Aditya. “Sorry, I overslept… ”, he said. Oh, he is in here all along. After a while, the founder, Hafiz Rancajale and Otty Widasari come.

Ok. Let’s start. Forum Lenteng began its activity from a discussion group inisiated by Hafiz Rancajale and Otty Widasari, together with a group of students in 2003. From the beginning the group was strongly interested in the impact of media and was committed to many activities focused on culture and history. They were somehow able to self fund the first five years of their activity and then as their achievements came to be recognized they have now come to the point where they can run their projects through multiple grants. Currently, there are eighteen members who run the space and organization. They also have an affiliation association with over fifty members who have joined. Whoever loves film and the video is eligible to enroll and the majority of these members are students. The membership offers the opportunity to join in Forum Lenteng’s various events and also the library services and so on.

This is the founder, Mr. Hafiz Rancajale. He seems to be about ten years older than me. He looks like a deep, mature guy, the Tom Waits of Jakarta. 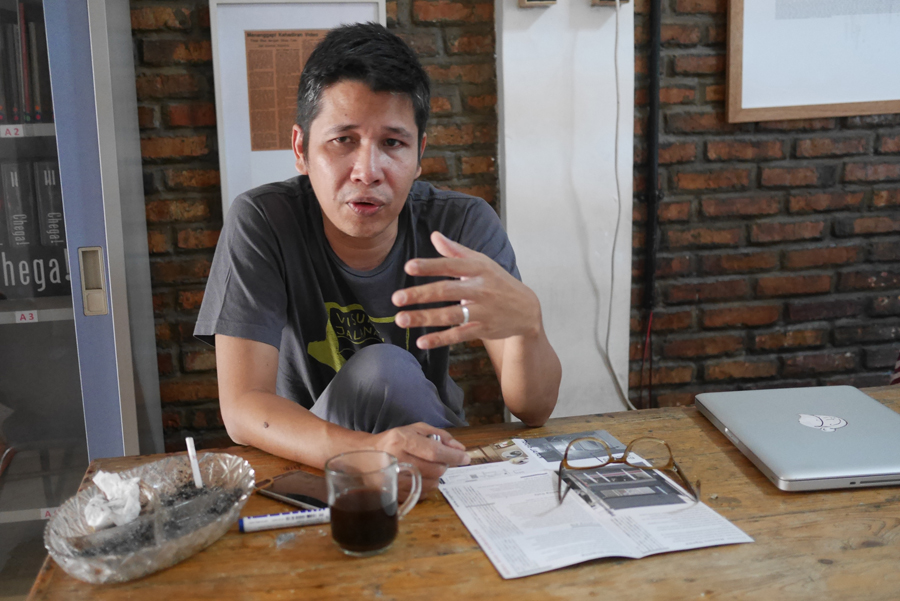 While each member has their own job somewhere else, they are also in charge of each project at Forum Lenteng. All projects are education oriented and they carry out many programs related to media. Specifically, this includes organizing an art festival of video art and technology, a documentary film festival, the publication of a magazine on film and video, exhibitions and research on street art, performance events and film screenings at Forum Lenteng, as well as community based art projects in local villages in Indonesia and so on. They certainly conduct so many activities at the same time. I really admire them. Jakarta also has outstanding people like this.

This is the workspace. It seems that lectures, film screenings, and performance events are held here. 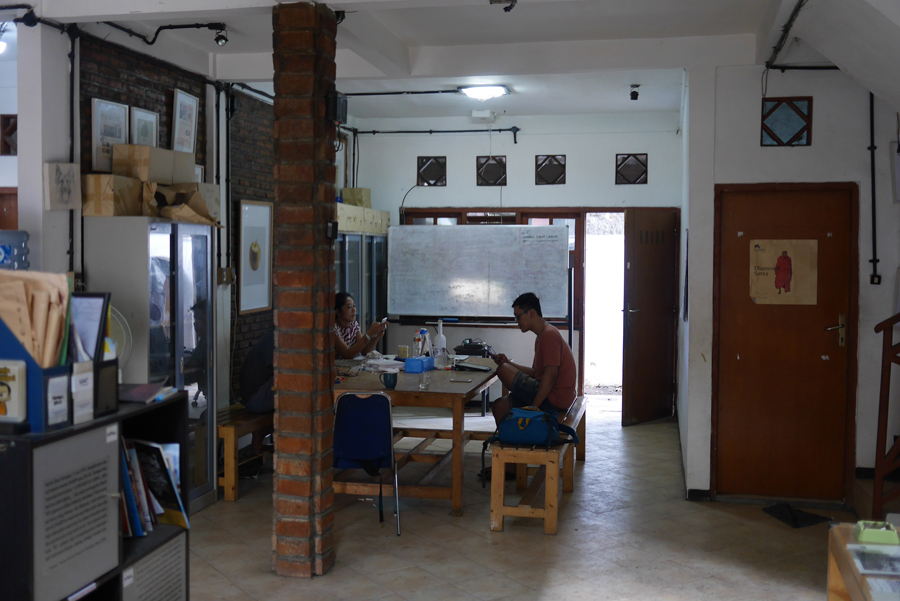 A patio. The sun light shines so good here. 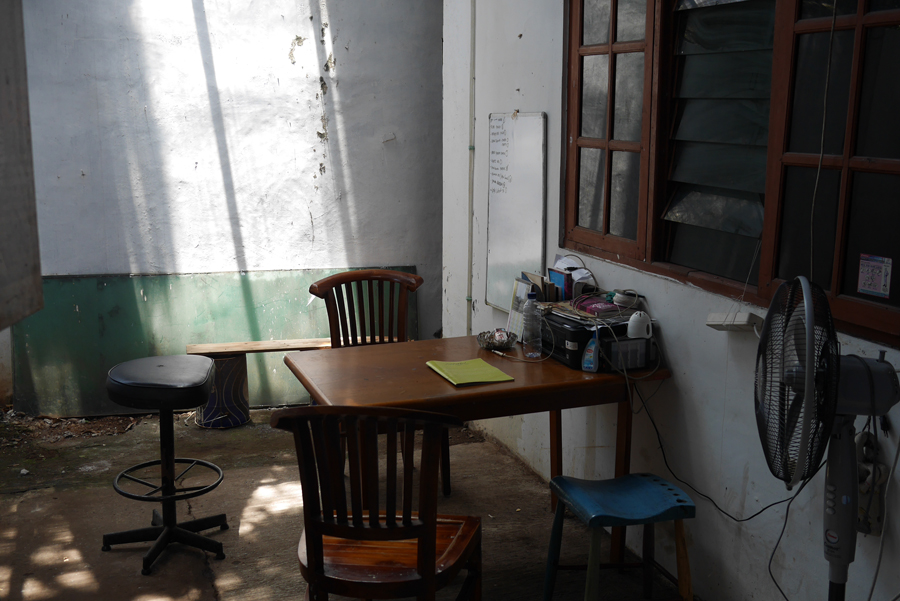 The documents of past exhibitions. 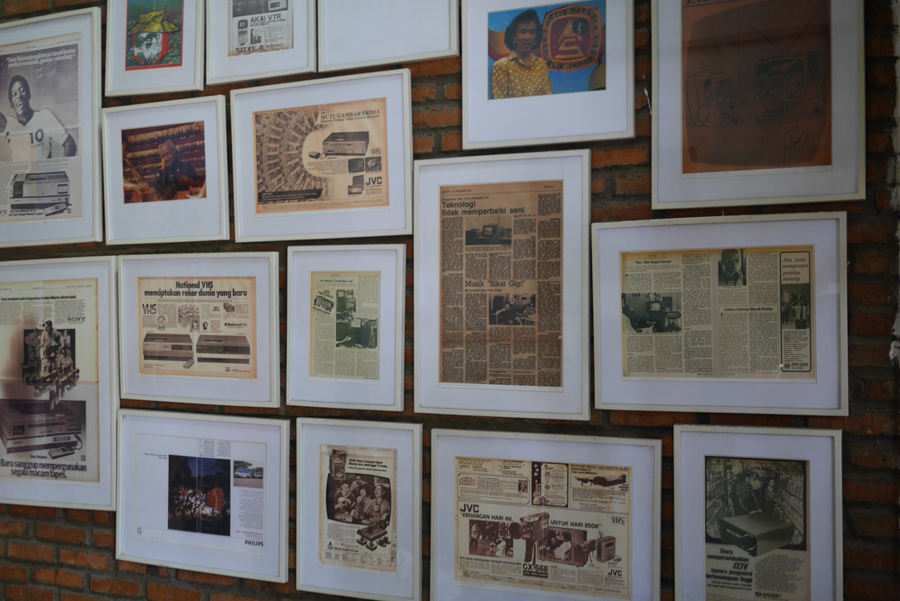 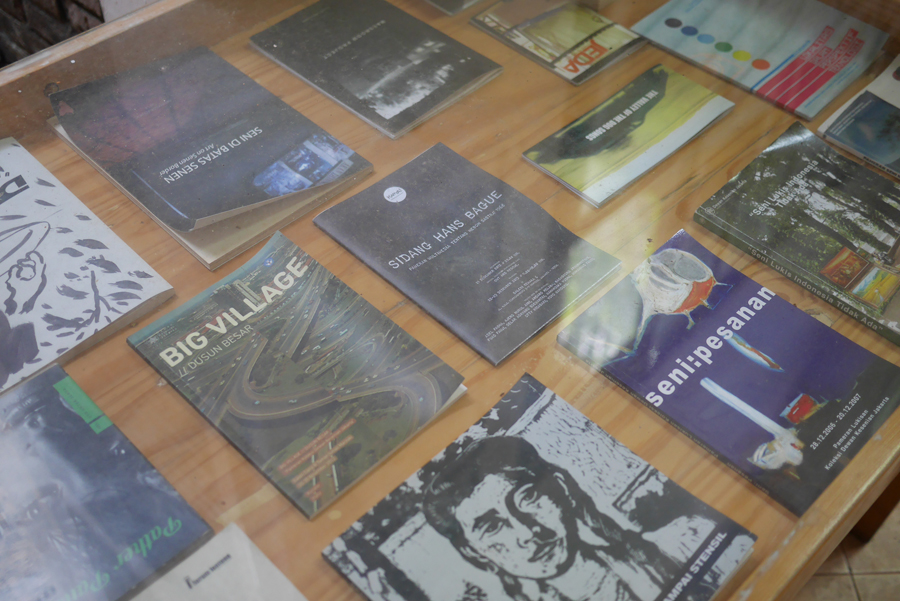 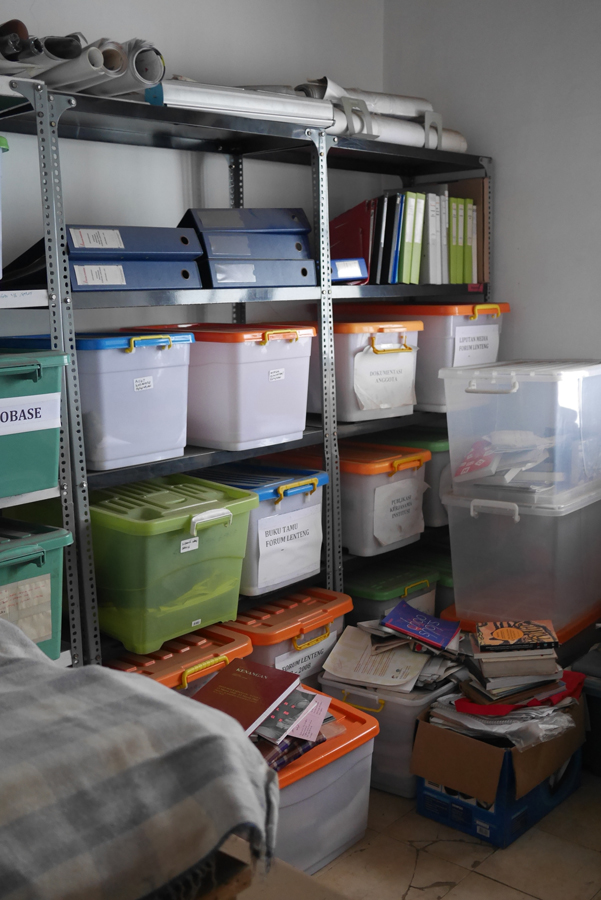 They archive all their projects very well and I am so overwhelmed with the perfection of their endeavors. It seems like an institution rather than a group. But there is no sign that they want to make money through such activities. I feel so much that the people here seem to fully enjoy a life that cannot be bought with money. I really want to follow such an example.

The final shot of the team. From the left, Mr. Hafiz Rancajale and Ms. Otty Widasari. Otty is in charge of the village art projects and seems to be a very kind person. Hafiz and Otty are a married couple. They really rock. On the right is Mr. Yuki Aditya. It seems like he is still half asleep… Of course, he was a very nice guy. 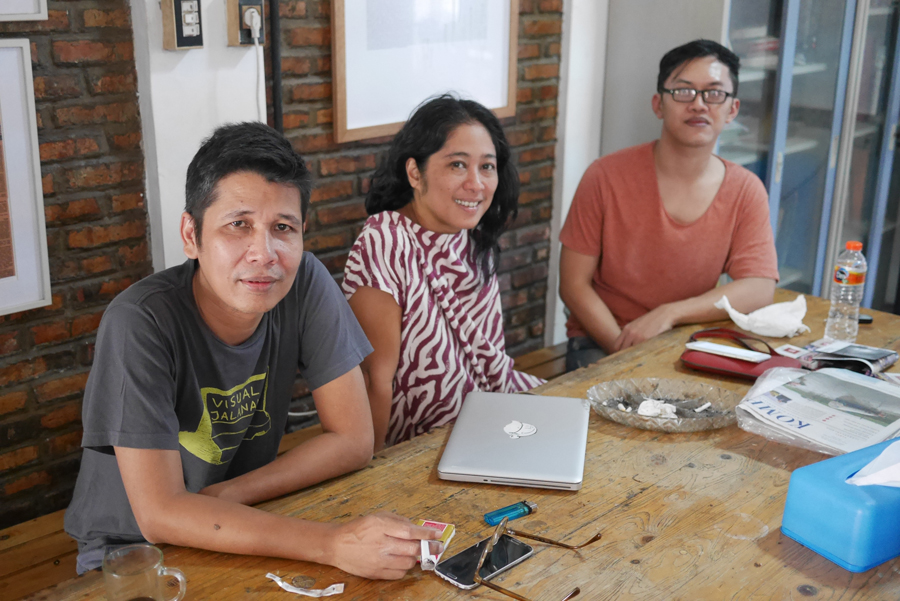