Leaving Laos, I arrive in Yangon, Myanmar! Even though there is not much information on Yangon, I go to the one place I’ve been introduced to, New Zero Art Space.

The weathered window decals on the second floor hint at the way that time has passed. 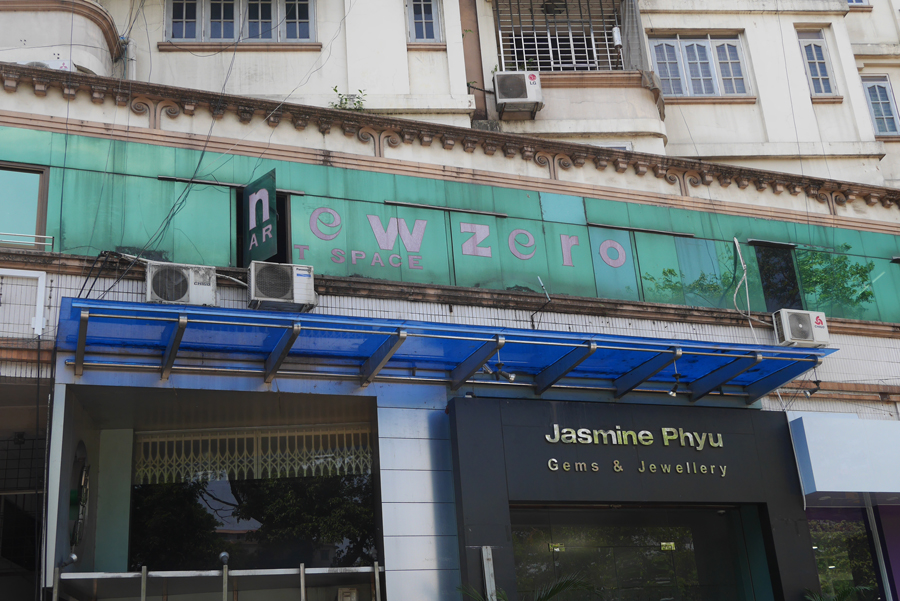 The gallery curator, Ms. Haymann Oo, tells me their story. 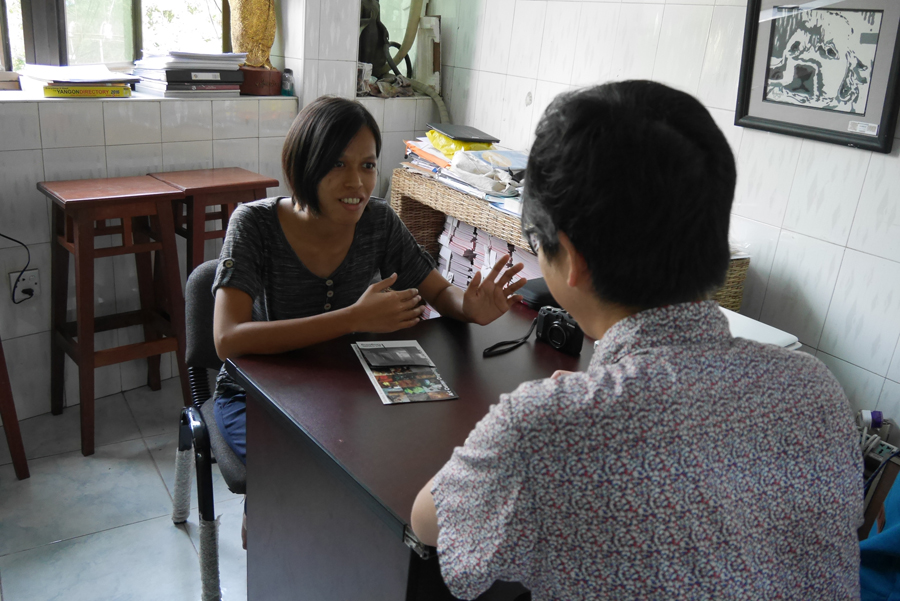 In 2008, New Zero Art Space was opened and founded by Mr. Aye Ko （founder and artist）. Mr. Aye Ko formed the art group, “Modern Art 90” in 1990 which changed its name to “New Zero Art Group” in 2000. He then started the current space 8 years ago. Mr. Aye Ko said he was arrested for his participation in the 1988 pro-democracy uprising and demonstrations, for which he was put in jail for three years. I can not even begin to imagine how much the experience must have influenced him, but since the 90’s to the present day, he has been at the forefront of the art scene in Myanmar. Unfortunately because of the timing, I could not meet him this time. Even though he was born in 1963, and is now more than 50 years old, I hear that he is still very active in his practice.

This is the gallery space. 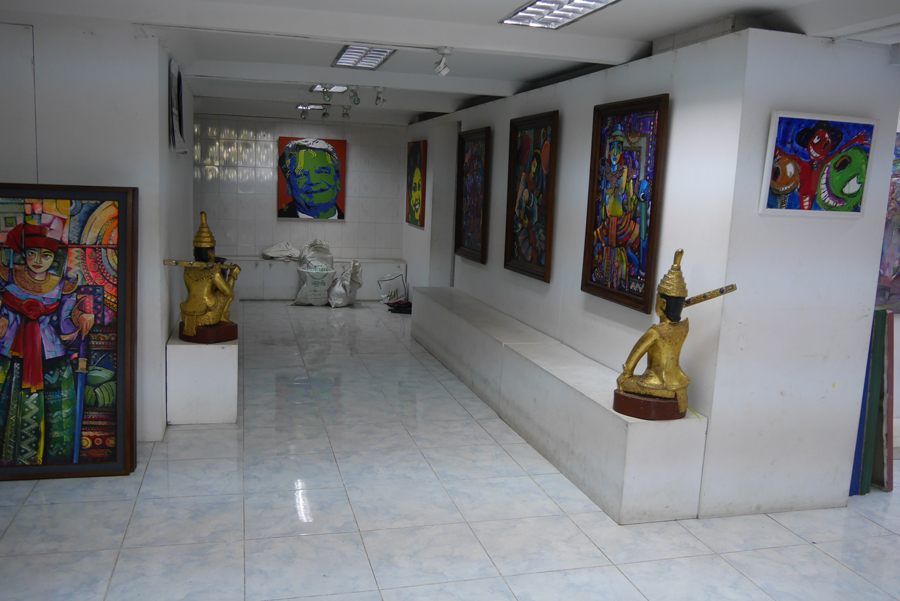 They sell works too. 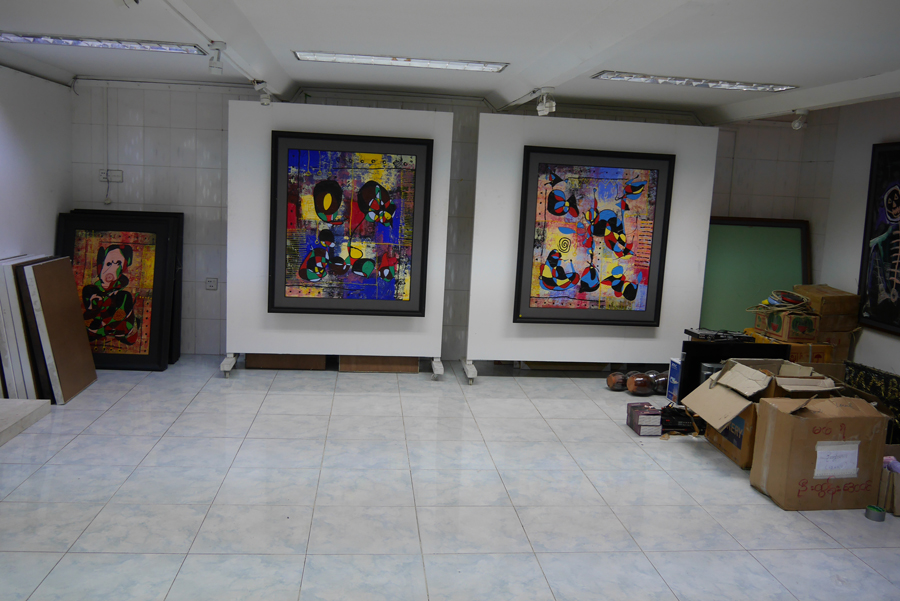 This is the library. There is also a residency program. 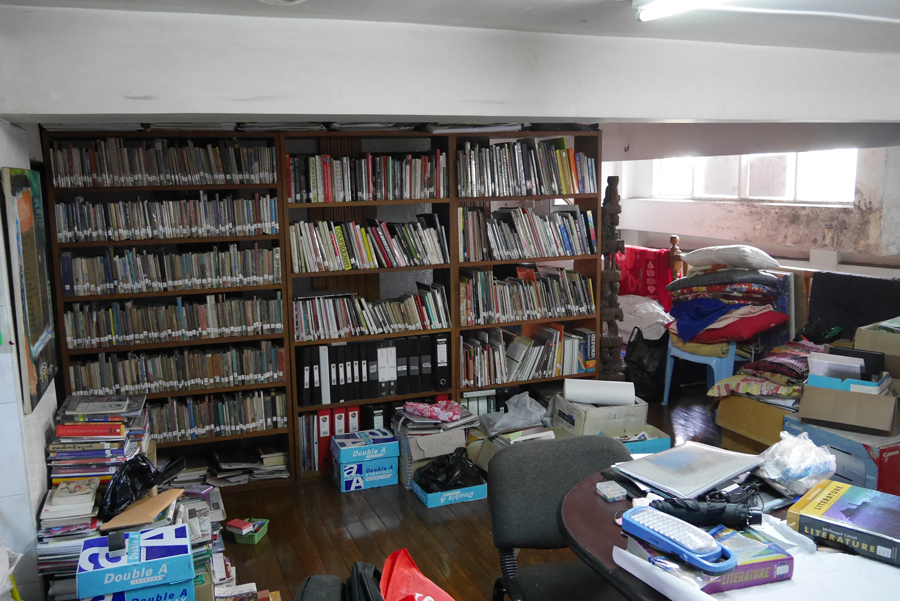 New Zero Art Space functions as a gallery, studio, residence, and library as well as a venue for lectures and art classes. When it first opened, it had a membership system and only members were allowed to use the space, but from 2015, it was made available to everyone for free, in order to fulfil its purpose as an open place for all. Surprisingly all art classes are free too.

There was a painting class in progress, right during the time of my visit. 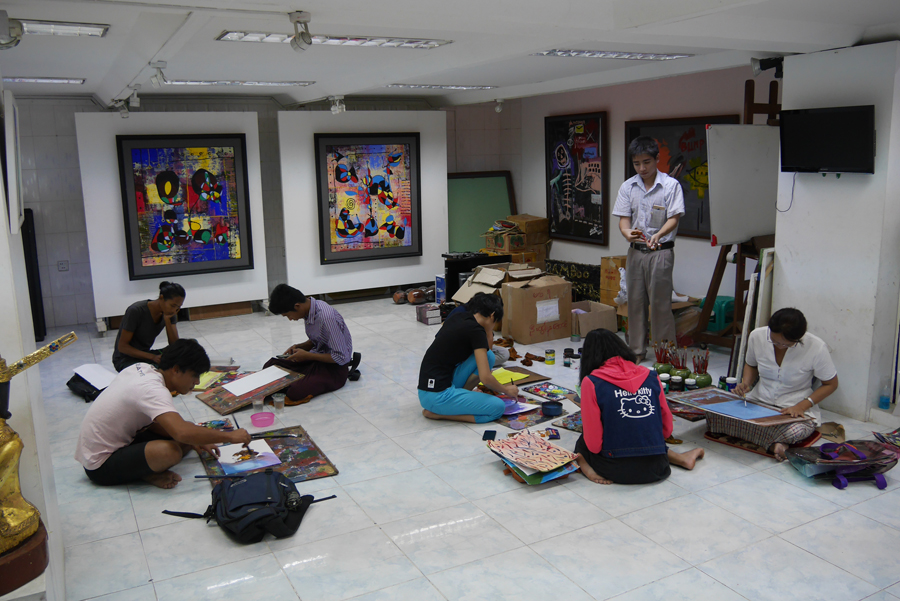 I learnt that all of the management costs for the entire space were supported by Mr. Aye Ko’s private savings. Only some specific projects are funded by some international foundation and collaboration. However, he had used his own money to fund everything before being able to receive these grants. As well as being a representative artist of Myanmar he also manages a publishing business, from which proceeds he uses to manage the space. Since the 1990’s, it’s amazing that he has been leading the art scene in Myanmar for over 25 years!!

Currently New Zero Art Space is managed by four staff including Mr. Aye Ko. Some of these staff members also have lodging within the art center. Besides planning within the space, they also organize a wide range of other activities including exhibitions and performance events in the city as well as educational programs in rural villages. Ms. Haymann Oo, who I interviewed, was originally a student of the New Zero Art Space art classes and I guess many people who graduate from this place take on responsibilities in looking after the next generation in the Myanmar art scene.

Thank you for speaking with me. 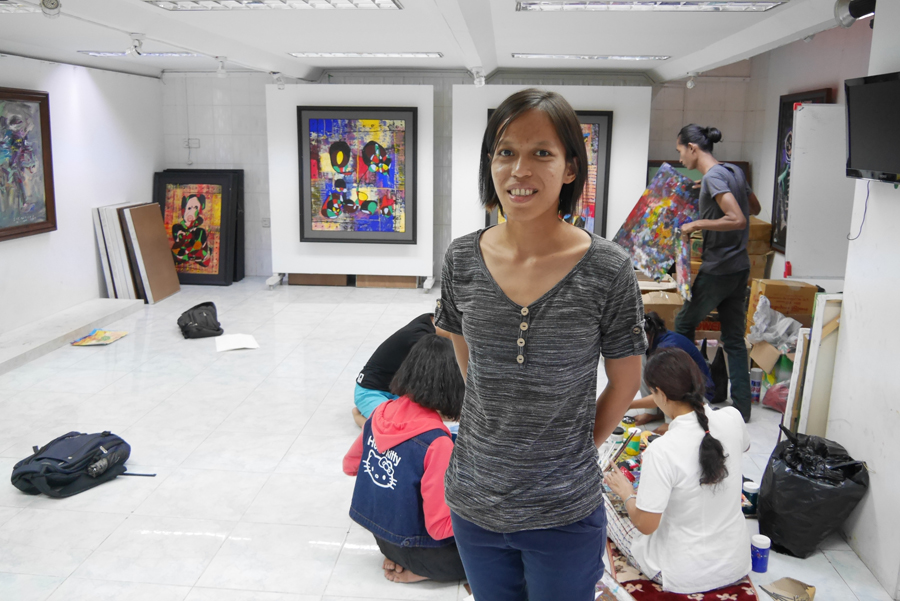 At the forefront of the Myanmar art scene for over a quarter of a century.
New Zero Art Space
http://www.newzeroartspace.com.mm/
https://www.facebook.com/New-Zero-Art-Space-206571392699436/?fref=ts

After an introduction by Ms. Haymann Oo, I visit an art space called Studio Square. 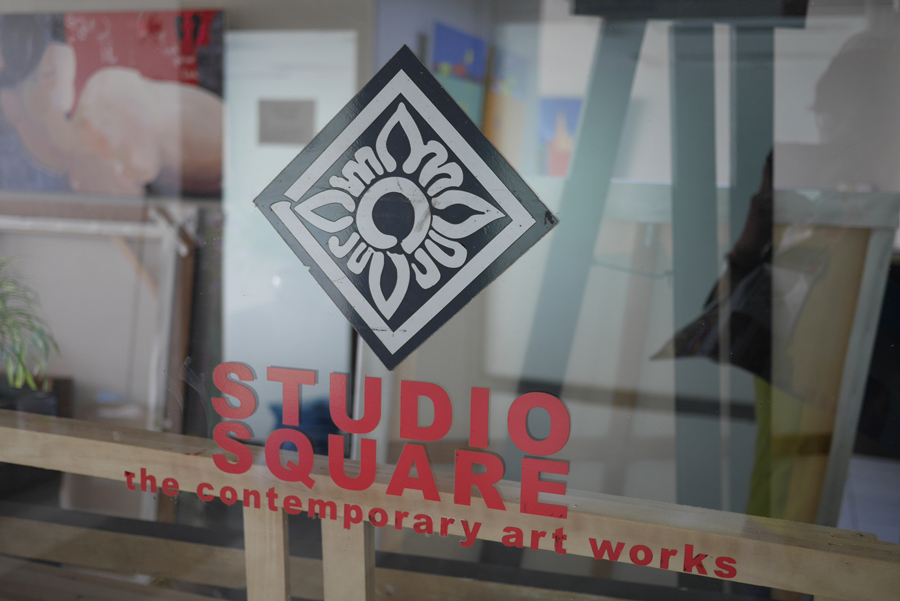 Mr. Min Zaw, a painter and Co Founder tells me their story. 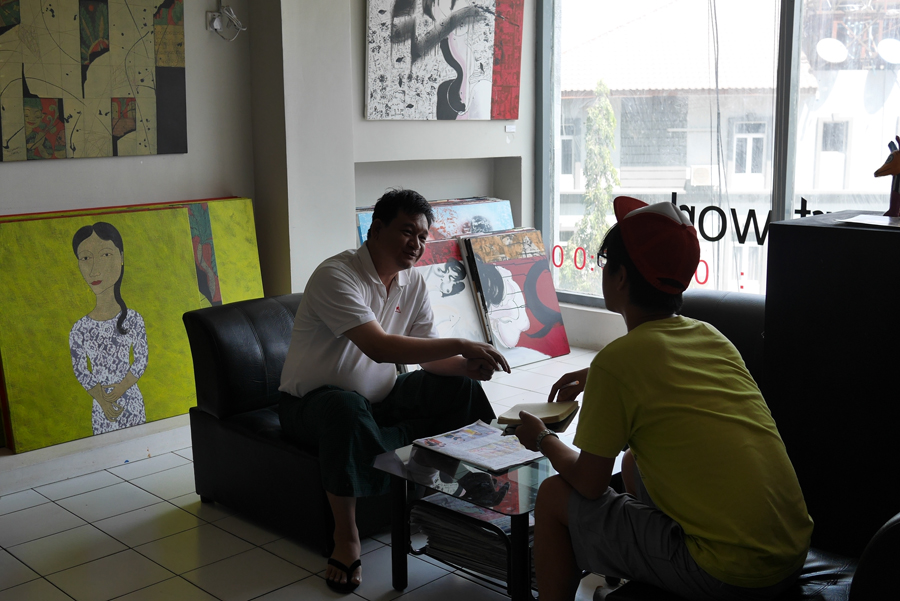 The space was established by four artists in 2004. It is a gallery and also their studio. three of the four member are painters and one is a video artist. Mr. Min Zaw is a full-time-artist, living off the sales of his artworks to support himself. He also sells his work in the space and contributes 30% of the total sales to the continued operation of the artspace.

Rows of artworks on display. 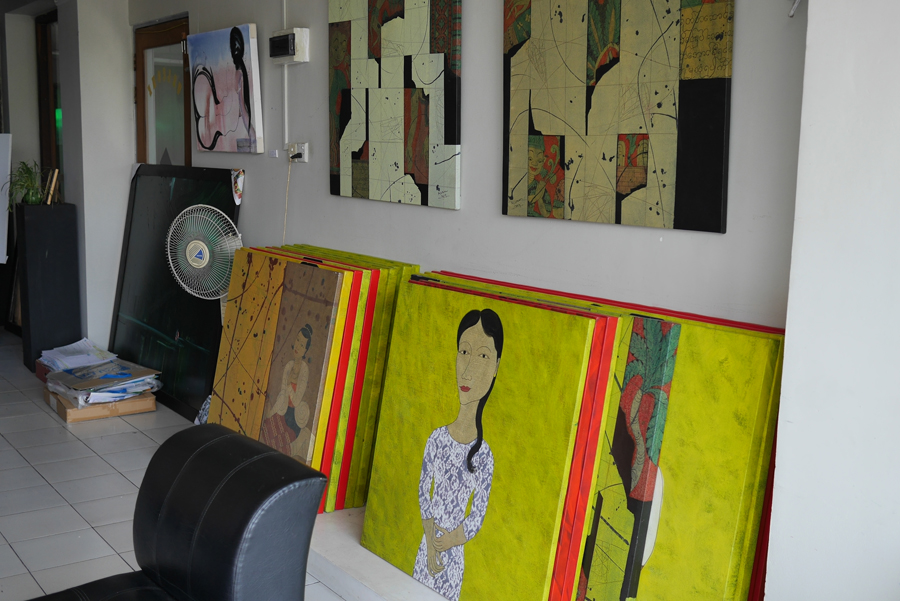 There are 3D artworks as well. 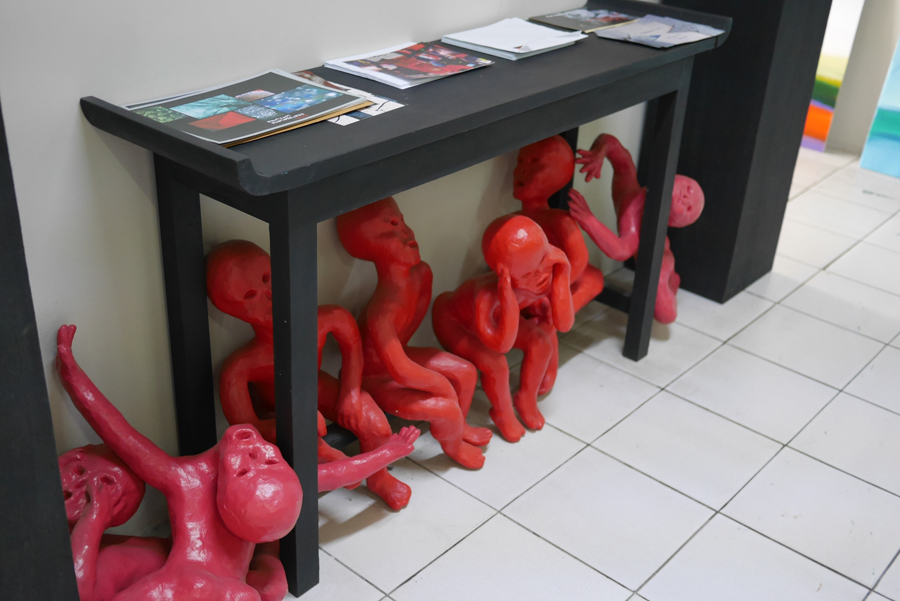 They also deal in artworks from non-members. 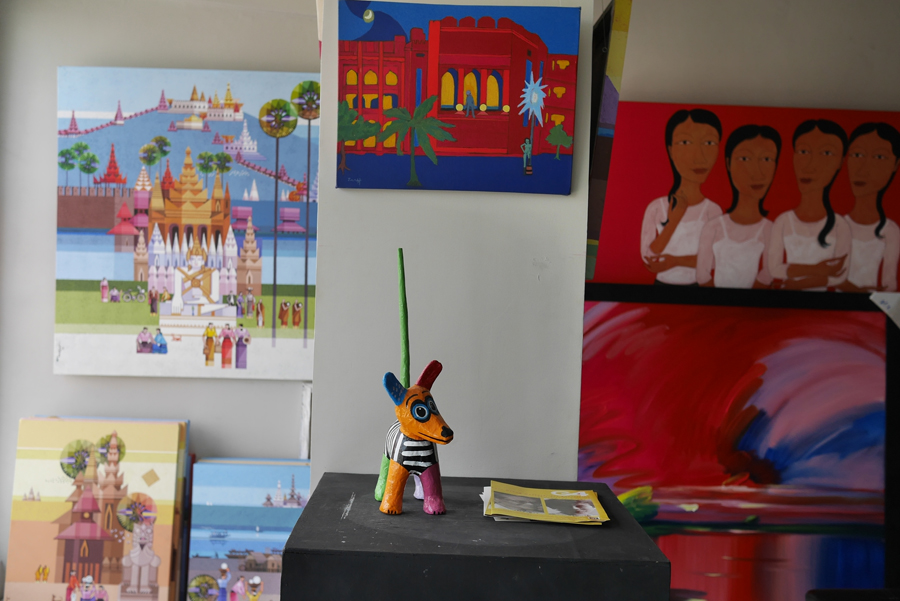 Besides displaying members’ artworks, they also hold exhibitions for young artists and organize three big exhibitions per year. These exhibitions are not only in the field of painting but also include video, installation, and performance. Recently the economic situation in Myanmar has been rapidly changing and the rental fee for the space dramatically increased meaning that they will need to find a new space within the year. However they say that they will continue their artistic efforts even if they move to another place. 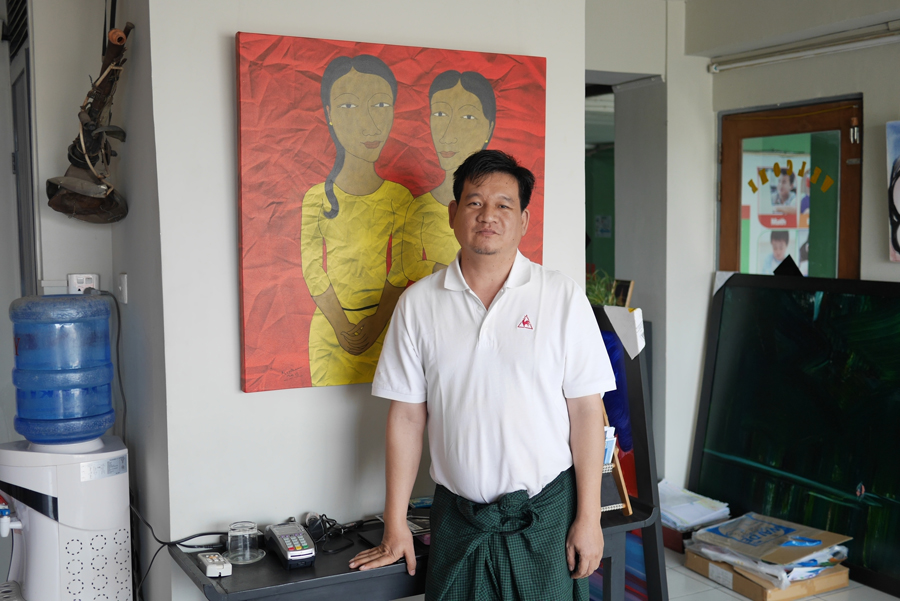 Because it is run by four members, they form a square （I guess.）
Studio Square
http://www.studiosquaregallery.com/
https://www.facebook.com/pages/Studio-Square-Pearl-Condo/635404596545726

Besides this, I would like to introduce a little bit more about Myanmar since it is awesome. 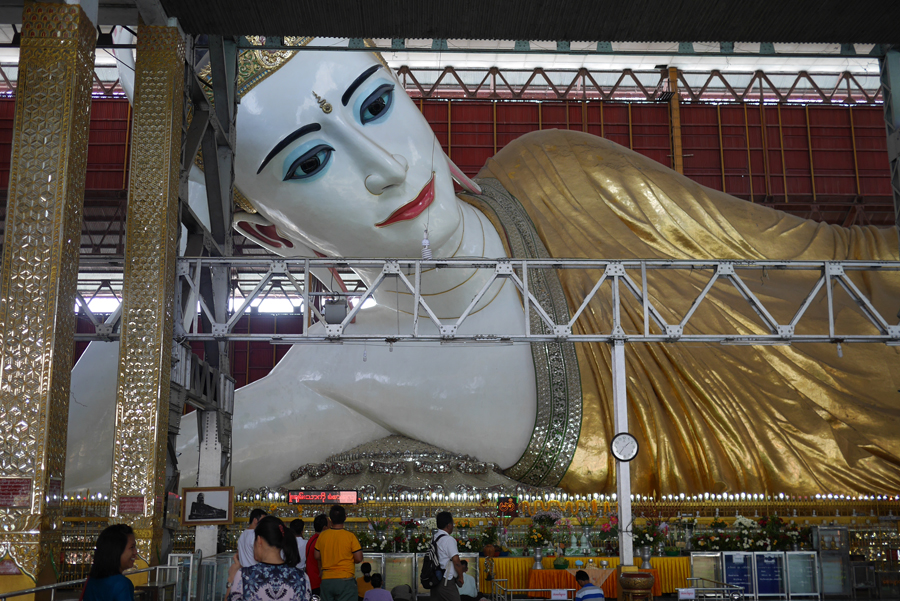 Ma Ei, an artist whom I met here. She is having a photo exhibition. 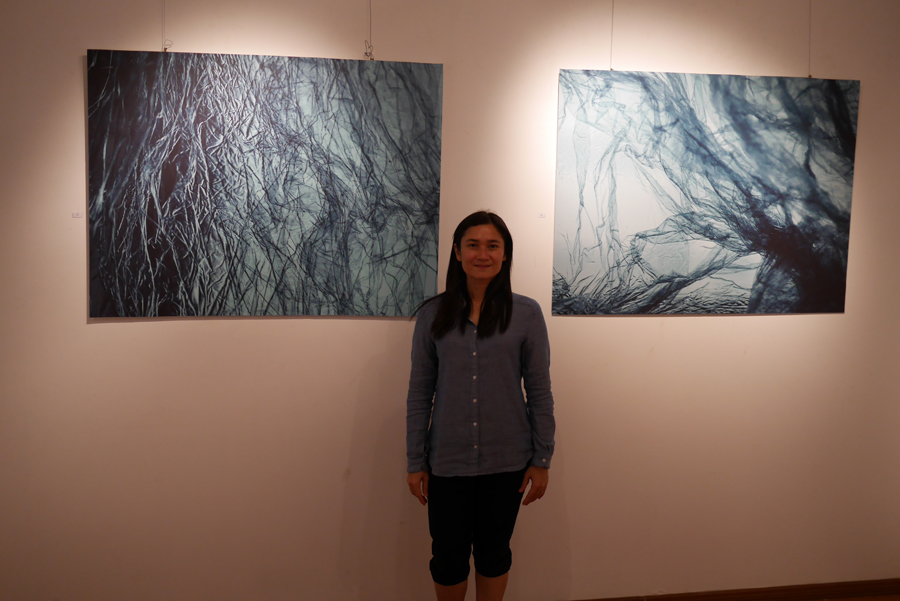 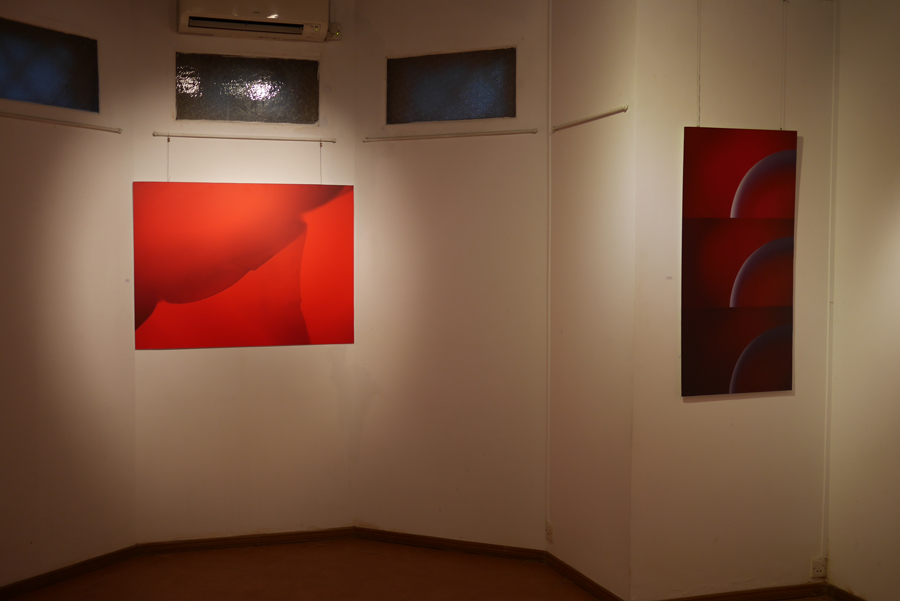 Shwedagon Pagoda in Yangon, with the changing colors of the sky. It was very beautiful. 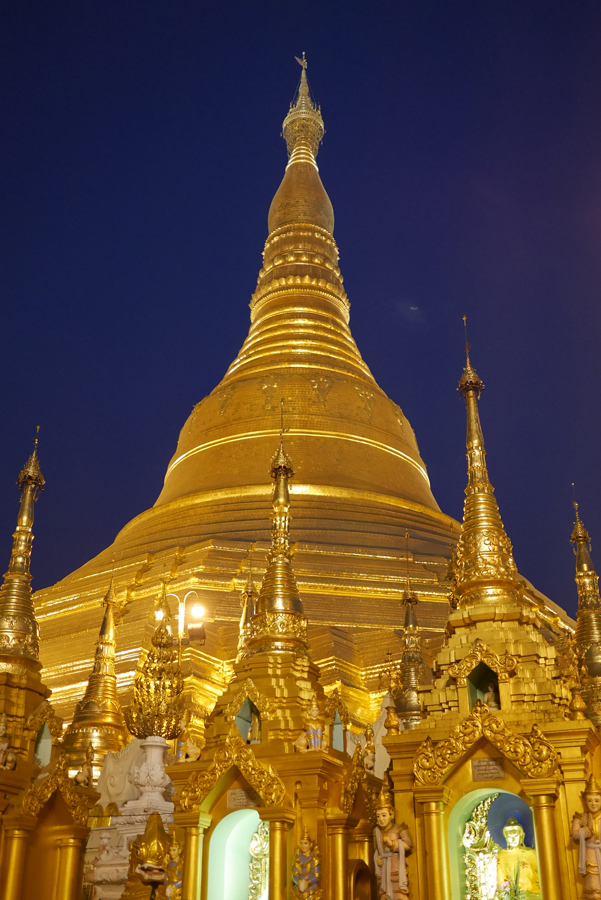 This is the end of my chapter on Myanmar. I will be going back to Thailand next and visiting Ratchaburi.