Riding two-up on the scooter of the philosopher, Antariksa, today I am heading to the roots of the current alternative art scenes in Jogja. Driving out of the hustle and bustle of the town, the greenery was getting thicker and we soon come out into complete countryside, although we are actually only riding for half an hour. Here is the village landscape is rich in nature and there are no landmarks. Even the philosopher, Antariksa is getting lost. Driving around and around, almost turning into butter under the heat we finally arrived. This is the studio of legendary artist collective, Taring Padi.

The entrance of the studio. 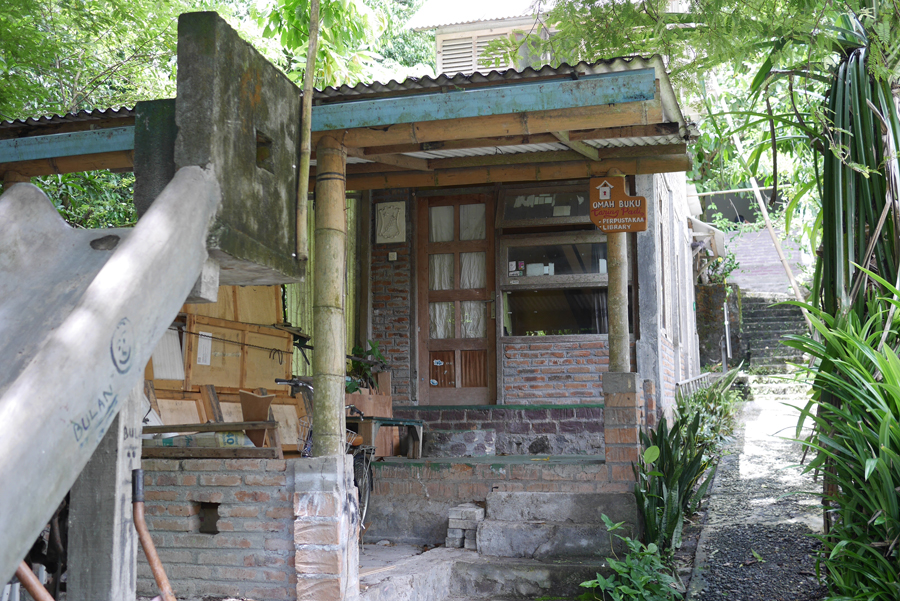 Ucup Baik （right back）, one of the founding members and Djuwadi （left）, a current member, shares with me their story. 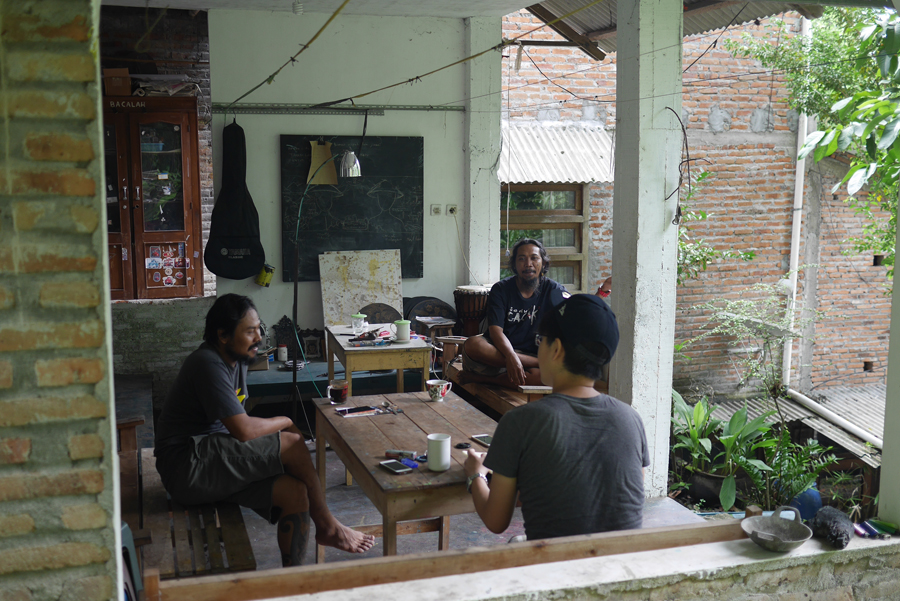 Taring Padi was first established in 1998. The readers of this blog might have noticed the number of 1998 has appeared several times here. This number is quite significant in Indonesia. This is because it was in 1998 that the former president Suharto was forced to resign following the uprisings across the capital city, Jakarta, and the wider country, as 31 years of dictatorial presidency came to breaking point. In Indonesia, all political collective activities were prohibited in Indonesia until 1998, since then, diverse groups have been emerging at an explosive rate. 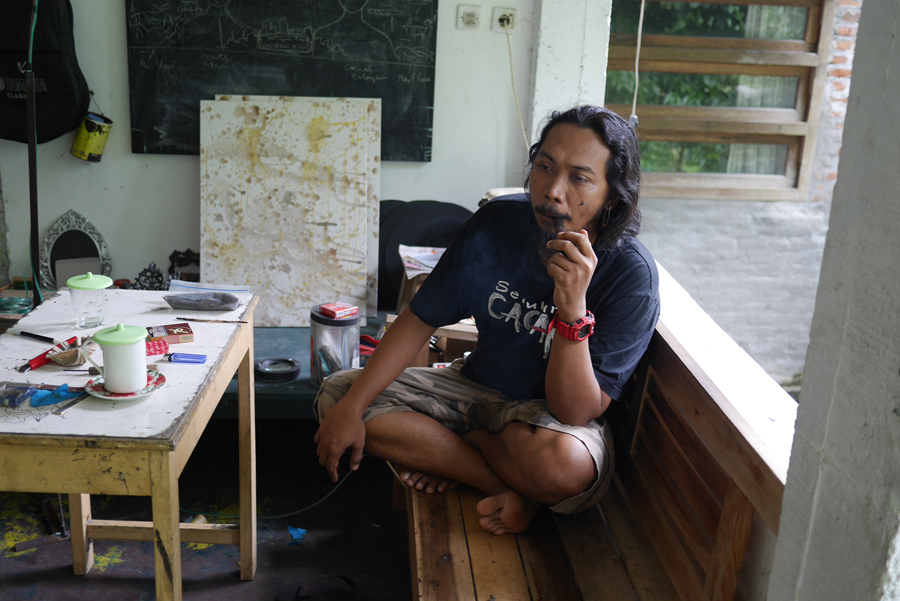 Taring Padi was formed by fifteen members in Jogjakarta in the year of the resignation of Suharto, and squatting in a former art school building with the students and dropouts of the college as their central figures, activists, musicians, poets, theatre performers continued to live together for several years. While they organized exhibitions, music concerts and symposiums day and night, in parallel to their artistic expression, they also actively got involved in social movements. Countless young creators visited the space squatted by Taring Padi and this became a momentum for each of them to start new groups and activities. It could be said that this is the very reason why the alternative art scene in Jogya is so rooted in this space. In 2003, they were forcibly evicted from their squat, and they went on to buy a studio of their own in 2007. Now all Taring Padi members are volunteer.

Later on, I visited the school building that Taring Padi squatted. Now it is under state control. 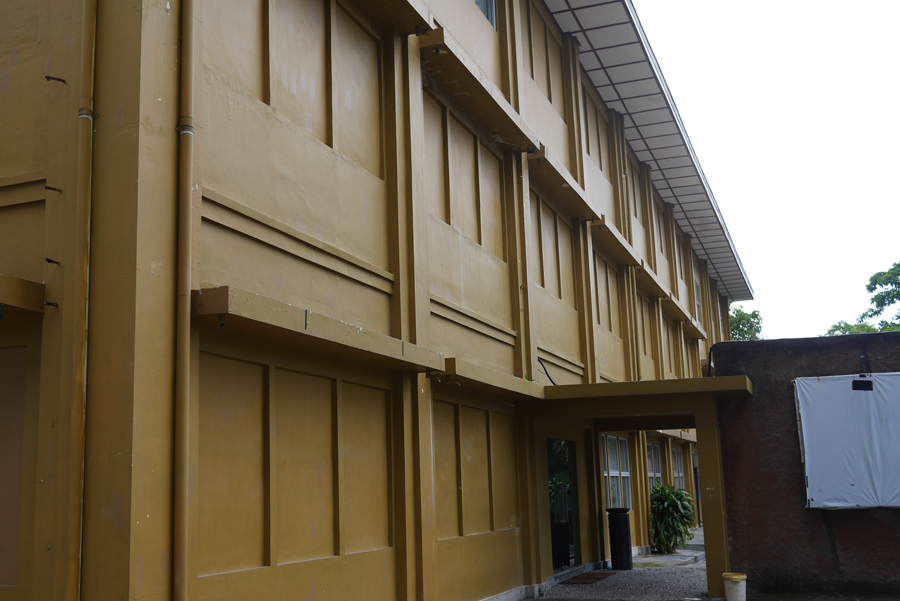 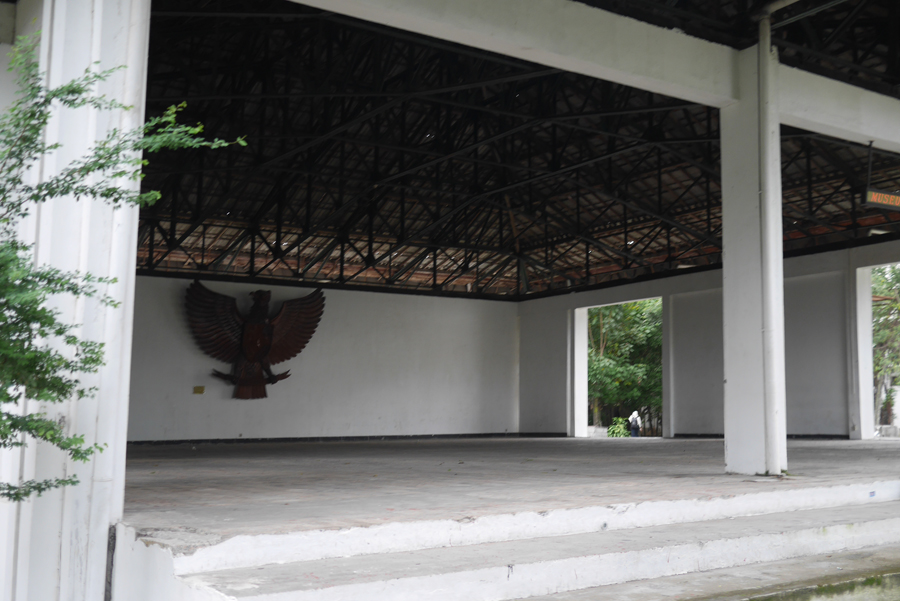 Taring Padi carry out various campaigns as activists as well as being artists. Taking art works of the wood-block prints as their weapon, they sharply question the problems being faced by many different communities across Indonesia. Producing posters, banners and T-shirts with wood-block prints and silk screens, whilst also collaborating with various local festivals etc. they are able to disseminate their political message too. They also work with villagers to produce music and performance events. In this way, Taring Padi offer up the power of art to support local residents who protest against the local administration as they face many issues such as corruptions and exploitation. Their activities have keenly drawn the art industry’s attention as well as that of NGOs and activists all over the world.

They show me the wood block-print works. 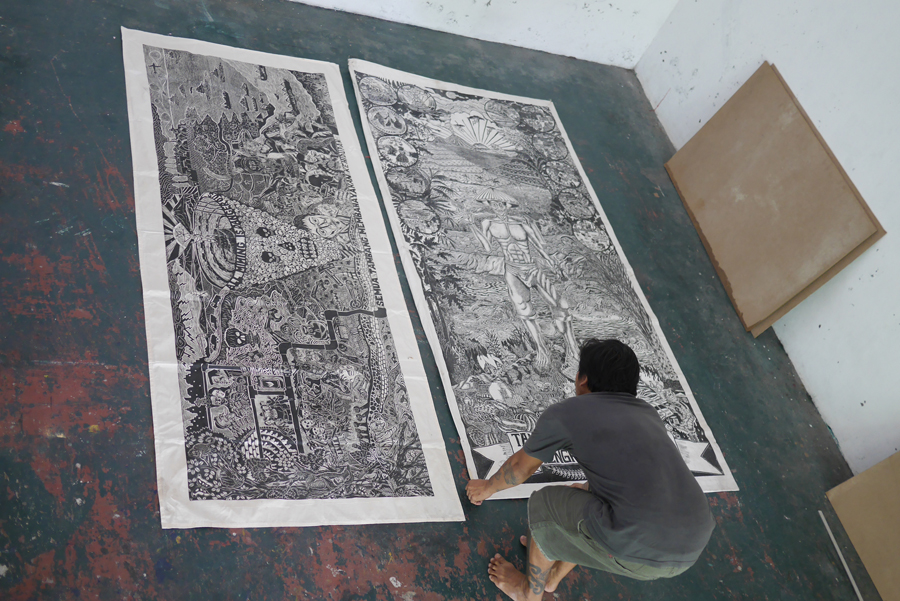 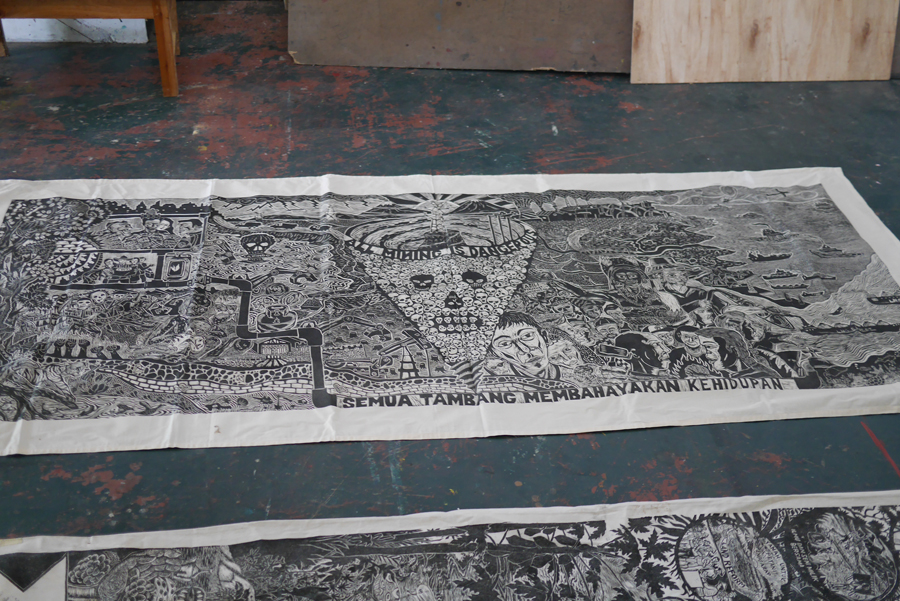 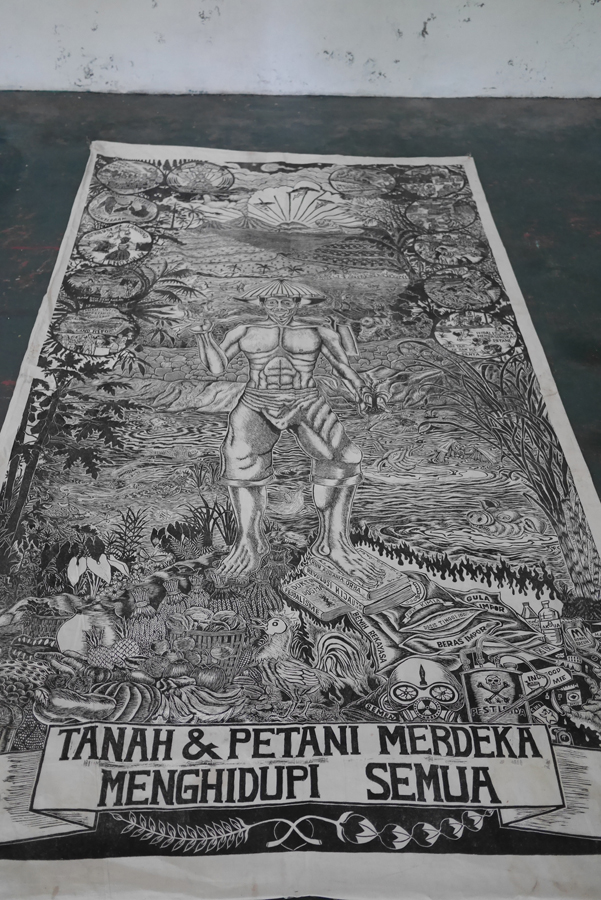 Taring Padi’s mural in the middle of Jogja city. 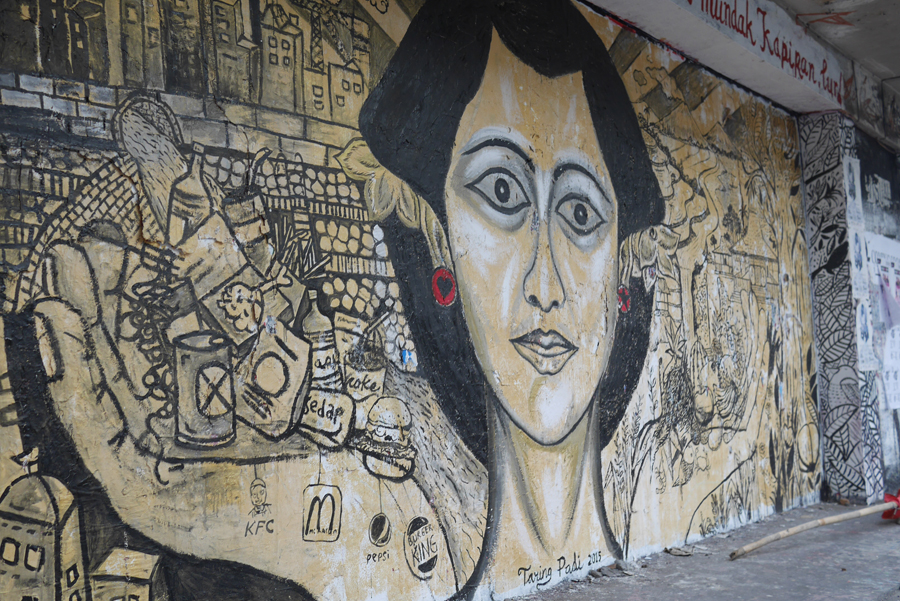 Apparently there was a time when there were very strict rules of the organization but these days they have a more open structure in which they organically engage in activities as a collective without hierarchy or rules. Taring Padi means “the fang of the rice”, and they are pretty sharp. The roots of Jogja is really hard-core as I had expected.

With other members who came to the studio later. 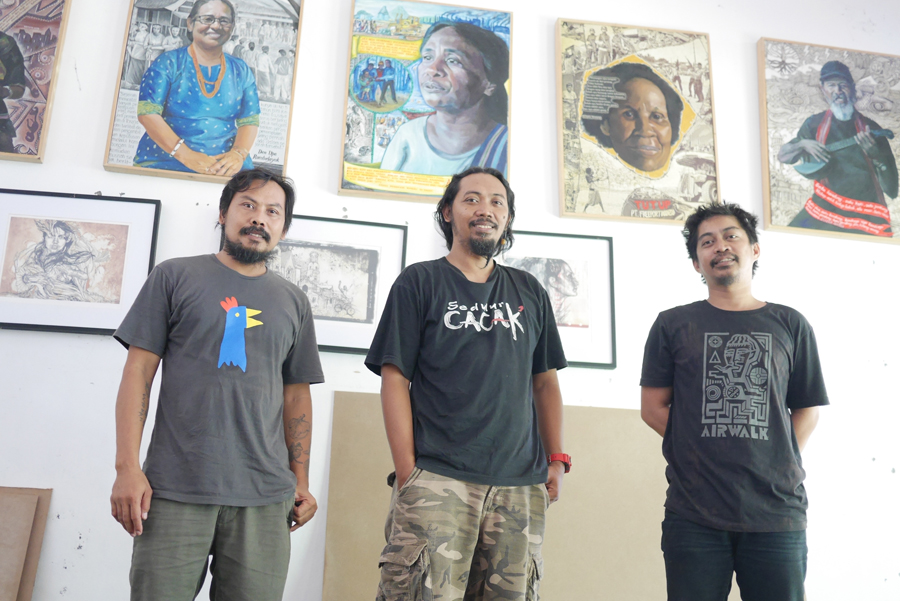 Took a picture together. 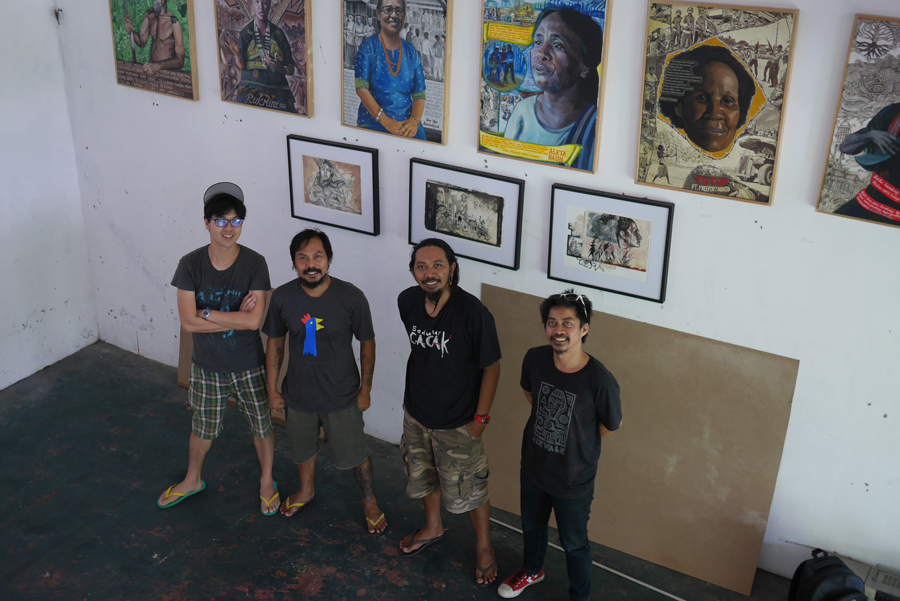 Search out the roots of the sharp rice.
Taring Padi
http://www.taringpadi.com/
https://www.facebook.com/taring.padi.10?fref=ts